Abu is an animal resident of Portia with whom the player can develop a friendship. Known to the town simply as Papa Bear, he is the local resident bear who lives just outside the city walls facing the hills and waterfall. He spends most of his time wandering those hills and catching fish in the Portia River. He is the adoptive father of Oaks.

Not much is known about the bear named Abu except that he adopted Oaks and everyone calls him Papa Bear. He's a very gentle and intelligent creature that likes to roam around Portia in his favorite bathrobe. Merlin speculates that Papa Bear was a regular bear that came into contact with some chemical agents from the past.

Papa Bear Abu was born on Day 2 of Summer. When Oaks was abandoned in the woods as a baby, Papa Bear found and adopted him. Papa Bear thought that Oaks should interact with other humans and moved to Portia to allow Oaks to attend the local school.

Papa Bear gets agitated during the summer, causing Oaks to find a method to cool him down due to the heat.

Merlin speculates that Papa Bear was once a regular bear but had come into contact with some chemical agents that changed his biology.

Abu is a very large humanoid bear, with brown and white fur, who towers over the humans of Portia while lumbering around on two feet. Abu wears a large light blue robe with white polka dots and a wide yellow belt. Beneath the robe he has on yellow underwear with white polka dots.

Abu's only family in Portia is Oaks, his adoptive son.

When befriending Abu, his relationship network with other NPCs will also be affected, resulting in the player receiving favor points from those NPCs as well.

Giving gifts to Abu affects the player's relationship with Abu. Every character has unique gift preferences.

Abu can partake in group photos with the player after reaching the Associate level. 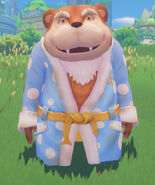 Retrieved from "https://mytimeatportia.fandom.com/wiki/Abu?oldid=73426"
Community content is available under CC-BY-SA unless otherwise noted.