Ack is a living artificial intelligence (AI), created during the Age of Corruption to serve as a chef for the crew members of the Altair One space station. He is over 300 years old but did not witness the Day of Calamity or the Age of Darkness, as he had remained in maintenance mode for 330 years, 2 months, and 17 days, until the space station fell out of orbit and crashed in the Collapsed Wasteland. Now he lives in Portia, working as a freelance cook at a grill in Peach Plaza.

He is a peaceful, friendly, and well-spoken character. As the player gets to know him more, he will open up about his lost love, Lara, and will start visiting the Workshop upon completion of the The Lonely Robot.

Ack has no in-game biographical information available, even after reaching two full relationship stars. His biography only contains a set of question marks due to his enigmatic nature. He also has no birthday or weight registered.

Ack has no family in Portia, but he has gotten to know some of the townsfolk including Arlo, who helped in rescue and repair efforts after Ack's space station crashed, and Toby, who finds Ack fascinating. He considers each of them a Buddy.

Ack's true love and crewmate aboard the Altair One was another living AI, Lara, who was destroyed in the space station's crash. Ack mourns her passing every day. The player eventually has the opportunity to build a Lara Model for Ack as a part of The Lonely Robot.

When befriending Ack, his relationship network with other NPCs will also be affected, resulting in the player receiving relationship points from those NPCs as well.

Note: Neither Lara nor the Lara Model are a part of Ack's relationship network.

Ack can often be found next to his grill near A&G Construction in Peach Plaza. He may occasionally visit the Food Store in front of The Round Table, or wander down Main Street [ verify ].

If the player has a Lara Model in their yard and Ack is hired as a helper, then Ack will also sporadically visit the player's yard throughout the day.

This schedule is valid in the final part of the game where Ack visits a late game character. This happens on Mondays and Wednesdays, so the default date is set to Sunday to avoid spoilers.

Developing a friendly relationship with Ack unlocks new dialogue that reveals more about Ack and gives the player access to special relationship perks.

Although not listed in his in-game profile, if The Lonely Robot is complete, when Ack reaches Buddy status (

) with the player, he will offer to become their helper, offering his services during his daily visit to the Lara Model. The player must have a Lara Model in their yard to trigger this dialogue. If accepted, Ack can be hired to help with domestic work and resource gathering for a monthly fee.

Ack can gather resources around the workshop and place them in the red delivery box next to the mailbox to the right of the gate to the workshop.

The following items can be acquired from Ack:

Giving gifts to Ack affects the player's relationship with him.

While Ack is hired as the player's helper he will cook for the player. Ack initially can only cook dishes in his recipe list, but as the player discovers recipes of their own or upgrades him with recipe data chips, he can begin cooking those as well. Ack's data chip dishes are unique and cannot be cooked using any crafting station.

The player can access Ack's cooking menu by interacting with him and select the recipe and quantity they need. The cooked dish appears in the player's inventory. The player does not need to have the required ingredients in their inventory for Ack to cook.

Hiring as a helper Edit

Ack can be hired as a Helper around the Workshop after fulfilling certain requirements.

First, The Lonely Robot must be completed. After the player has completed the mission and placed the Lara Model in their yard, Ack will visit her every day. Once the player reaches Buddy level with him, Ack will offer his help with the workshop and can now be hired for 1200⁠

⁠ per month. The player can pay for up to one year of service at a time.

Once hired, Ack does not stay at the workshop all day, but will visit multiple times per day to tend to it. Ack's potential services include refueling machines and picking up finished products, feeding animals and picking up any drops, and harvesting, replanting, and fertilizing crops. He can only use resources put in a Helper's Storage Box, and will place all collected items in the delivery chest next to the player's mailbox.

Ack will not perform certain functions, such as feeding fish, petting animals or mounts, or building things for the player.

Ack can be upgraded with various data chips while the chips are in the player's inventory. These allow him to perform more functions around the workshop as well as cook more recipes.

Data chips can be purchased at the Research Center Exchange and found while digging in the Abandoned Ruins. The second upgrade to the Relic Detector will show the shape and name of the data chip, as well as other relics.

⁠ The Lonely Robot
Ack misses his dear Lara very much, try building a replica of Lara based on Ack's drawing of her, this will ease his pain.

⁠ The Perfect Trap
The Mayor wants you to construct an AI Source model to lure the Locator Computer thief into a trap.

⁠ Talk to All Source
Petra has trouble communicating with All Source, she ask you to bring Ack to the Research Center.

⁠ Finding Happiness
Ack seems down, talk with the Mayor to see if you can do anything for him.

⁠ Made Whole Again
Ack's temporary leg is no longer able to support him. Help him build a new leg.

⁠ Place the Flowers
Ack is still locked up for the safety of the town, help him place some flowers on the grave of his deceased crewmates.

Ack's drawing of Lara, used as a blueprint for the Lara Model 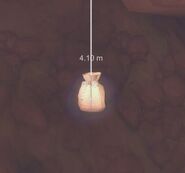 Retrieved from "https://mytimeatportia.fandom.com/wiki/Ack?oldid=74712"
Community content is available under CC-BY-SA unless otherwise noted.