My Time at Portia Wiki
Register
Don't have an account?
Sign In
Advertisement
in: Characters, Marriage candidates, Bachelors
English

Albert is a resident of Portia that the player can befriend and eventually marry.

Albert is an extroverted ladies' man with some notoriety before the player even arrives but, on the inside, he has some insecurities. He is also a very competent businessman who is very involved in the expansion of Portia's infrastructure.

Albert was not born in Portia, but moved after Gust proposed setting up a construction business. Thus, the A&G Construction (Albert & Gust Construction) company was born, located right next to the Commerce Guild. Albert specializes in the construction and management aspects of the company. He is adept at liaising with others in the industry and is often Mayor Gale's go-to man to coordinate collaborative projects.

Albert likes to try his luck with women and is always asking one person or another to go out with him. His interests include his best friend's sister, Ginger, the doctor's assistant Phyllis, and the restaurant waitress Sonia.

He has fair skin and blue eyes. He has very dark brown/black hair trimmed and parted on the left with a loose strand hanging near his parting. He chooses to keep clean-shaven in keeping with his slick businessman persona with the exception of his sideburns which he keeps thick but well groomed. He wears a white dress shirt with light brown trousers with a matching belt. His smart gray pointed tipped shoes match his waistcoat adorned with silver buttons perfectly which he uses to keep fastened at all times. He finishes his look with a scarlet neck-chief that proudly completes his ensemble.

Albert doesn't have family in Portia, but he is close with Gust, his Friend and business partner at A&G Construction. He isn't in a committed relationship, but he does seem interested in women, particularly Ginger, who is Gust's sister.

Albert is often found near his desk in A&G Construction during business hours, and can sometimes be found in The Round Table [ verify ] after work.

**Times that were verified playing at 50% game speed**

Albert is one of the potential bachelors that the player can romance.

Upon reaching Friend status at four full hearts, the player can confess their love to him with a Heart Knot. If the confession is successful, his relationship status changes to Boyfriend. After Albert has become the player's boyfriend, upon reaching Lover status at eight full hearts, the player can then propose to him with a Wedding Ring. If the proposal is successful, his relationship status changes to Husband. Once certain other conditions have been met, Albert and the player can then try for children.

⁠
A chance at receiving gifts first thing in the morning, will occasionally re-wallpaper the house

Giving gifts to Albert affects the player's relationship with Albert. Every character has unique gift preferences.

The following items are desires, or wishes, which are randomly assigned to one or two characters per week. The player is required to be at least at Associate level with Albert for him to be assigned a desire. More desires have a chance to appear as the player's friendship with Albert progresses; the new desires are added to the existing ones but do not replace them. Some characters may desire an item that they do not normally like.

In the event that Albert has a desire, gifting the wanted item will provide the higher tier points; otherwise, on non-desired events, the item gives the base point value. The birthday or festival day relationship bonus applies when gifting a desired item.

The Pot of Asteria will appear on a bedside table inside Albert's house if Albert receives it when desired. If given the Golden Necklace as a desire, he will wear it for a while.

Albert can spar with the player up to three times per day.

Note that the level in the table below is Albert's base level at the start of the game. Albert's actual level can be higher because Albert will level up over time.

Albert can partake in group photos with the player after reaching the Associate level.

Occasionally, first thing in the morning, the player may leave their house to find Albert outside, hoping to invite the player out for a date or play date.

Once the player has become buddies with Albert, they can schedule a play date together.

After the player has successfully confessed how they feel to Albert, the player can schedule a romantic date with Albert.

If the player chooses to dine at The Round Table with Albert during a play date or date, it is recommended to order dishes he will like. If asked before ordering, Albert will sometimes tell the player exactly which dishes to order; other times, he will just give little hints. In the event that Albert does not specify the exact foods desired, the player should order between three and six dishes, depending on what hint he gives. It is recommended to order each of those dishes from different courses, ex. ordering one Appetizer, Meat, Vegetable, Dessert, and Drink course each, rather than five Desserts.

Albert's food preferences are listed below. The player is advised to use these preferences only when Albert does not tell the player what to order. If Albert tells the player a list of dishes to order or gives a hint, it is advised to follow his wishes instead. The full restaurant menu can be found at The Round Table page.

As the player develops their relationship with Albert, special interactions are unlocked, including Hug and Kiss.

Albert occasionally uses the Relic Pieces Exchange board at the Museum to trade for relic pieces. Albert likes to look at particular completed relics, so after the player has donated such relics to the Museum or displayed them in their yard, Albert may come visit the Museum or the player's yard to view these relics. Such visits will earn the player relationship points each time, with the amount dependent upon the relic.

⁠ Vehicle Pitstop
Albert needs your help to install a Water Tower and a Charge Station in South Block. The diagrams are attached in his letter, construct and install them in South Block.

⁠ The Desert Wind
South Block is in need of some wind generators to generate electricity, build and install 3 of them.

⁠ The Portia Harbor
We are in need of 10 Waterproof Cloths/Concrete/Igneous Bricks for the construction of the Portia Harbor. We'll need it in 15 days. Please deliver it to the Commerce Guild once you've completed the order.

⁠ To Light the Way
Construct a Light Beacon for the lighthouse.

⁠ The Harbor Crane
A mechanical crane is needed for the new Portia port. Albert suggested that you consult with Petra first.

⁠ The Burnt Warehouse
A warehouse has been burned and the air cooling relic inside was destroyed. Albert wants the player to help make a new cooling unit. Talk with Petra first.

⁠ Reconstruction
The battle with All Source and the Rogue Knight destroyed the Portia School as well as the Central Plaza gate, they need to be rebuilt.

⁠ Commission of Happiness
Help A&G Construction deliver some wallpaper samples to customers before 18:00.
This is Gust's romance mission.

⁠ Love Like A Blue Moon
Help Albert have a talk with Ginger.

⁠ Peace in Politics
Mint wants to make peace with Gust. He asks you to find out what Gust likes.

⁠ Perfect Appearance
Albert has something to say to you.

⁠ Room for a Princess
Albert suggest you change the Pumpkin Princess into a room, and use that to propose marriage to Emily.
This is Emily's romance mission.

⁠ Spicing It Up
Go to Area by East Gate with Albert.

⁠ The Big Flower Sale
Alice's garden had a good harvest. She wants you to help her promote the Flower Shop during a sales event.

⁠ Time To Get Serious
Talk to Phyllis' friends to find out why she refused to marry you.
This is Phyllis' romance mission.

⁠ Unknown Package
You've found a package containing architectural plans, no idea who it belongs to, go in the town and find the owner.

Albert may post a commission on the commission board in the Commerce Guild. Below is a list of possible commissions. 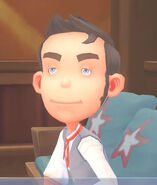