Amber Island is an island located southeast of Portia. Amber Island is home to numerous trees and houses the cave. Crystal ore deposits can be found throughout the island, including within its cave. Liuwa is often standing outside the cave on a daily basis.

Quick travel to Amber Island is available after completing The Dee-dee Stops Here.

Accessing Amber Island and the caveEdit

Amber Island is inaccessible at first until commissioned to build the bridge that connects the mainland to the island. Upon registering the player's workshop from Gale, Gale sends out a commission to build the bridge in order to investigate and clear out the cave for use of a haunted attraction. After building the bridge, Gale grants the player access to the cave, unbeknownst to the danger that lurks within.

After exposing Huss and Tuss as the bandit brothers and con artists, the brothers sabotage the player by committing vandalism on the player's property. With the help of Pinky, the player was able to track down Huss and Tuss in Amber Island's cave.

Gale's plan to renovate the cave into an attraction comes to light. This attraction features hunting "ghosts" and collecting Ghost Badges. In order to continue with the renovation, Gale commissions the player to build the Haunted Cave Sign and Tree of Claws and placing them outside of the cave to help attract tourists.

Later on, as the Haunted Cave, the cave becomes home to a minigame where the player can shoot ghosts and earn Ghost Badges.

A fishing spot is located to the south of Amber Island. 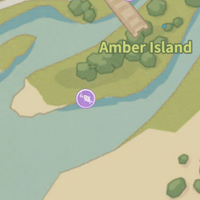 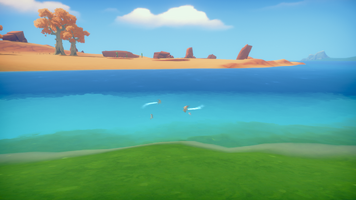 The Amber Island fishing spot is on the southeastern shore of the island, past the Madcrabs and Snaillobs, near the location of the date activity Doodle. The player can reach this fishing spot after they have placed the bridge in the Bridge to Amber Island.

The drawing minigame can be found in the southern portion of the island within the beach area, as well as the light the fireworks activity.

On the southern tip of Amber Island, fireworks can be set off and launched into the air.

After completing the Haunted Cave, the cave becomes accessible as a minigame, either solo or with a date.

Main article: Sitting on the grass

Players can take their dates to Amber Island to sit on the grass and have a conversation. This activity is not available during rainy weather.

Retrieved from "https://mytimeatportia.fandom.com/wiki/Amber_Island?oldid=61366"
Community content is available under CC-BY-SA unless otherwise noted.