My Time at Portia Wiki
Register
Don't have an account?
Sign In
Advertisement
in: Crafting stations
English

The Assembly Station can be upgraded to higher levels, allowing for larger projects and automation.

The Assembly Station can be moved and upgraded in the catalog at the A&G Construction. There are two options in the catalog: Move and Upgrade.

When the player click on the Move button, an overhead view of the Workshop will appear where the player can move and rotate the Assembly Station.

The size of the Assembly Station Level 3 is roughly 21 x 14 squares; it is not a complete rectangle so 22 squares are open along the front side. There are two separate assembly areas. The right-hand side works as before, with the player building an item by adding materials to a blueprint. The left-hand side is automated, enabling players to create multiples of a given blueprint. The assembly station takes 45 minutes for Level 1 blueprints and 1 hour for Level 2 blueprint. To begin production, all materials needed for all requested copies must be available.

The Assembly Station is where the complex recipes from the Handbook are built, such as other crafting stations and many large items for missions.

All projects crafted on the Assembly Station are crafted instantly, provided that all required materials are in possession.

Using the automated Assembly function removes the need to manually add the materials (instead, it will take the items needed from any storage or the inventory like other crafting would) and can be used to queue up multiple items of the same type at once, but each Assembly takes 45 mins or more of ingame time to complete.

These items require the Assembly Station to be upgraded before they can be crafted. 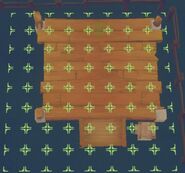