The goal is to have the heaviest crop. The crop can be placed on the stand located in front of Town Hall between 10:00-13:00, and can be taken back or swapped out at will before the judging occurs. After judging, the submitted crop will not be returned. Rewards are mailed upon the completion of the event. The player will receive a reward so long as they enter any valid crop, even if they do not win.

Although almost any crop can be used, only large crops grown from Special Giant Seeds and fertilized daily will place. Regular crops, or crops grown from seeds that are not Special Giant Seeds, will never place in the top three places. Special Giant Seeds can be bought from the Mysterious Man, and will grow crops to either Large, Great, Colossal, or King size depending on how well their fertilizer bar is kept above red during the growing period. Large or Great sizes may not place at all, whereas King should win first place. Apricot appears to be the only edible crop that cannot be entered.

Note: Since Special Giant Seeds are only available from the Mysterious Man the player will be unable to place in the competition during their first year unless they buy the seeds at the first encounter with the Mysterious Man at the end of month 1. Seeds purchased and planted in the end of summer will not ripen before the first Autumn Festival.

The weight of the player's crop is fixed based on its species (Apple, Bamboo Papaya, Pumpkin, etc.) and type (regular, Great, King, etc.) and can be found in the tables below. No weight unit is specified, but higher numbers are better.

However, both the type and weight of the competitors' crops are randomly generated, thus the values in the table below will not describe the actual or maximum possible weight for a competing crop. 

This article does not meet our standards. You can help improve it. Comments: Rewards need verification

NOTE: This event is currently bugged. Required ingredients may sometimes be missing, or correct recipes may erroneously make Wasted Food. It is unknown why this happens. If the player wishes to try the event again, they can reload the day, though reloading will also re-randomize the entries to the Autumn Festival Competition.

The goal of the Portia Cook Off is to select the right ingredients to make the shown dish, preparing a total of 3 dishes. The contest is in front of the A&G Construction building between 14:00-17:00. Rewards are mailed upon the completion of the event. The player will receive a reward if they attempt any dishes, even if they fail the recipes. If they do not try, they will not receive a reward. The player also gains 2 relationship points with all NPCs per successful dish.

The ingredients are supplied by the town and do not have to be in the player's inventory. If a recipe calls for two of the same ingredient (ex. two Meat or two Chili Pepper), only select that ingredient once. After selecting the ingredients, the dish is immediately prepared. During the cook off, all completed dishes are placed on the tables in front of the cook off contest area, and can be eaten or taken.

Behind the cook off contest area is a harvest pile where produce can be donated for points. These produce have to be owned by the player and need to be in the player's inventory. Donations from NPCs throughout the Autumn Festival also count towards the total point score. At 14:00, relationship is increased with all NPCs based on the points obtained. A minimum donation is required to receive rewards, and a total of 20 items can be donated for a maximum score of 500 points.

Autumn Festival Badges earned at the event can be used to purchase items at the cash register on Peach Plaza on the event day or at the Gift Exchange at the Commerce Guild.

When the Cook Off finishes at 17:00, special group photo opportunities will become available. They are marked on the map with

icon. Activate the glittering camera sign (right) and you'll take a group photo with the people standing next to the sign. The pose is unique to this festival and group of people. Try and get them all before the day ends!

Gust and Ginger waiting to have group photo taken.

An example of one of the group photos. 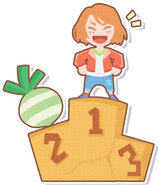 The Commerce Guild and Winner's Podium

The Cooking Competition and Harvest Pile

Letter Received for 3 Successful Dishes at the Portia Cook Off