Chemical Dropout is a boss monster that is always located in the last floor of each level of the Sewage Plant. Chemical Dropout can also be faced on various floors in the Deepest Ruin.

Depending on the distance from the player, and his health, Chemical Dropout will use one of his 3 attacks:

A viable strategy for this fight is to run close, and force Chemical Dropout to use his slow melee combo, instead of his more threatening ranged attacks. Directly after this would be the time to strike, before repeating the process.

Alternatively, when in Chemical Dropout's second phase, you can bait out his stream attack before running in to dish out a few melee attacks. 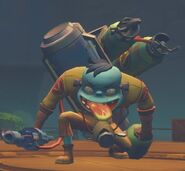 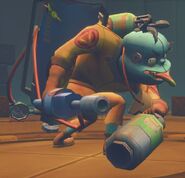