Northeast top of the inner city

The Collapsed Wasteland is a fenced-off area in the city of Portia that leads to the Sewage Plant Hazardous Ruins. The entire area is in shambles, with dilapidated buildings overtaken by nature and monsters surrounding a sunken lake. The wasteland hosts various hostile monsters, a lake with a fishing spot, rocks that provide the rare Nitre when broken, wild Bamboo Papaya and Ginger for ingredients, and many large trees.

The Collapsed Wasteland can be accessed via the gate above the Research Center. Initially, it is unavailable and cannot be unlocked until Spring 17 of the player's first year.

The eastern side of the Somber Marsh can be accessed after creating the Metal Ramp necessary to access the area north of the Collapsed Wasteland.

Sometime after the Age of Darkness, the Collapsed Wasteland suffered through various natural incidents, including the ecosystem reclaiming the land and the surrounding buildings.

After defeating the Rat King at WOW Industries, a space shuttle crash landed into one of the buildings in the Collapsed Wasteland, releasing a horde of monsters. The Civil Corps attempted to stop the horde from causing further destruction. The player provided the materials necessary to patch the hole.

With the hole patched, the Civil Corps and the player investigated the space shuttle; to their surprise, a robot named Ack emerged from the shuttle and was taken to the Civil Corps headquarters for questioning.

Polly became worried of Scraps whereabouts and asked the player to locate the dog. After several inquiries, the player managed to locate Scraps near the the sunken lake of the wasteland.

A fishing spot is located in the sunken lake. 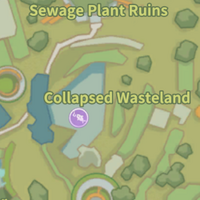 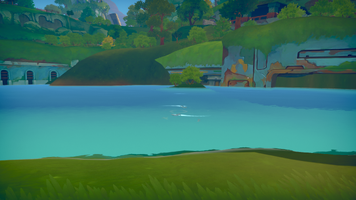 Retrieved from "https://mytimeatportia.fandom.com/wiki/Collapsed_Wasteland?oldid=74449"
Community content is available under CC-BY-SA unless otherwise noted.