My Time at Portia Wiki
Register
Don't have an account?
Sign In
Advertisement
in: Unbuyable items, Crafting stations, Cooking,
and 2 more

A&G Construction Store
Best Brother
Harbor Trade Station
Total Tools
Cooking Set is a crafting station that can combine various Cooking ingredients into new dishes. A Cooking Set can also be donated to the Museum or requested in a commission.

Cooking Set can be crafted using the Assembly Station.

To obtain the diagram the player would need to give 5 Data Discs to Petra at the Research Center and wait for 2 days before obtaining this diagram in the mail.

Cooking Set is mainly used for cooking. It can also be donated to the Museum or requested in a commission.

Cooking Set can combine various cooking ingredients into new consumables. Unlike with the other crafting stations, the player cannot interact with the Cooking Set to select an item to craft. Instead the player must add the ingredients directly into the Cooking Set, experimenting to find the right combination for a dish or using recipes learned from Django.

To cook the player needs to place the ingredients on the hotbar and select one of them. That ingredient can be put into the Cooking Set by left-clicking on it. A time bar lasting around 15 in-game minutes will appear over the top of the pot, and the player must add every other ingredient to the Set before the time runs out. The order of the items does not matter. Once the timer has finished, the pot bubbles for a few more seconds, then the player can interact with the Cooking Set ("E" on the keyboard) to take out the completed dish. The player can also finish cooking before the timer runs out by interacting with the Set.

The recipes learned from Django show in the player's recipe book even before the the player cooks them at least once.

Once a recipe is in the player's recipe book they can ask Ack to cook it if they have him hired as a helper.

Cooking Set is occasionally requested on the Commissions Board as a Rank B or Rank SS commission.

Cooking Set can be donated to the Portia Museum as a Small Assembled Item. When donated, the player earns ⁠ 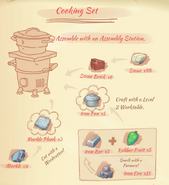 Recipes favorited appear under My Favorites.