Dee-Dee travel becomes available after completing the mission Assemble Dee-Dee Transport and after placing at least two Dee-Dee Stops, the plans for which are obtained during the mission Dee-Dee Stops Here. Three stops must be placed for the mission, and there are optional extra stops that can be placed as the story progresses. It is recommended for stops to be placed at every available location for the player's ease of use.

The service runs from the time that the player wakes up until 1:30 AM.

Once at least two Dee-Dee stops have been placed, the player can travel between them by interacting with any stop.

Though the Dee-Dee Transport System allows travel that is instantaneous for the player (other than two short cutscenes of the the Dee-Dee arriving and leaving), a set amount of in-game time passes while the player is riding the Dee-Dee. This amount of time depends on the distance from the departure to the arrival destination, ranging anywhere from about 15 minutes to over an hour. The transport system takes less time to travel from one stop to another by Dee-Dee than travelling by foot or mount, thus being a more efficient form of long-distance transportation than other options.

After using the service, the player recovers a small amount of stamina. The amount of ⁠

⁠ recovered is dependent on the amount of time consumed while travelling.

There are fifteen possible stop locations: five are available immediately, and ten more are unlocked as the player progresses through the main story. Each area that a Dee-Dee Stop can be placed is marked by a ⁠

⁠ icon on the map, while already-placed Dee-Dee Stops are marked with a ⁠ 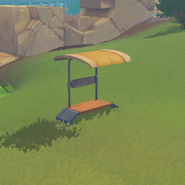