My Time at Portia Wiki
Register
Don't have an account?
Sign In
Advertisement
in: Around Portia, World locations

The desert has the Portia River flowing between it and Portia to the north, the Eufaula Heights to the northeast, rocky red cliffs to the east, and the Western Sea surrounding it to the south. There is one fishing spot in the desert, located at the Desert Oasis.

Two Dee-dee Stops can be added to the Eufaula Desert so that the player can easily access the desert via the Dee-Dee Transport System. One stop can be placed just beyond the Portia Bridge, while the other is in front of the lift going to the mines.

There is also a Long-Haul Bus that constantly roams the desert, circuiting from South Block towards the mines, then heading to the Eufaula Tunnel, then back towards South Block.

To be able to travel to the desert, the player must complete The Portia Bridge and wait for the bridge to be finished. The player will need to have a Level 3 Worktable to complete the mission.

When the desert is first opened, several places in South Block and the Eufaula Desert are not yet built or accessible.

The rest area across the bridge but before the desert proper is known as South Block. It houses the South Block Trade Post, Long-Haul Bus Station, and Siwa's house. This area is not yet built upon first access to the desert, other than Siwa's house.

Far east from South Block and up the hills is the Eufaula Heights, the hilly area along the Portia River. A fishing spot is found here, not far from the Bassanio Heights Dee-Dee Transport System stop.

Beyond the Eufaula Desert is Sandrock, another city-state in the Alliance of Free Cities. This area is not currently accessible in My Time at Portia.

The Desert Abandoned Ruins lies within a large, ancient building in the desert. The player can mine within the ruins for valuable materials and relics.

Out past the Desert Abandoned Ruins is a large quarry sunken in the sand, with two mines tunneling within its walls. Large wooden lifts, still functional, allow the player to travel between the desert and the quarry, though it is possible to simply run up and down the steep walls of the quarry.

Some Treasure Chests can be found in the quarry, on one of the lifts above and on the ground below.

Ingall's Mine is initially a defunct mining site. It is the location of Mission: Rescue in Ingall's Mine. After completing the mission, the Civil Corps will eventually open up the mine as a Hazardous Ruin.

After completing Mission: Dana's Mining Company, Dana opens up her own mining operation next to Ingall's Mine and will deliver ore to the player on a daily basis for a monthly fee, similar to the Tree Farm.

An oasis can be found near the center of the desert, along the eastern side. It contains a fishing spot and is surrounded by Palm Jujube Trees. The desert is the only place such trees can be found in the game.

Once the desert is unlocked, this fishing spot becomes one of the potential spots for the Fishing Day competition to be held at.

The Eufaula Tunnel is a project Portia and Sandrock jointly took on to drill a tunnel between the two city-states with the intent to promote travel and commerce. The player helps with the tunnel construction efforts during Mission: The Eufaula Tunnel.

Around the South Block area, Asteria and Dragon Heart flowers can be found.

Further in the desert area, Chili Peppers can be found as well as Cactus Fruit and Palm Jujube from the different kinds of trees, found in different shapes with various tiers, in a similar manner to those found on the grasses of Portia. Cacti can be harvested for woodstuffs and Cactus Fruit. The highest such tier cannot be cut by the Iron Axe and requires the Fisherman's Axe.

There are some breakable rocks about, from which Sulfate and Iron Ore can be obtained alongside regular drops. Animal Skeletons can be gathered in the desert. There are also rarely large Herbs that provide 20 herbs after picking, Asteria flowers and Chili plants. 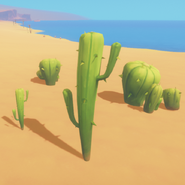 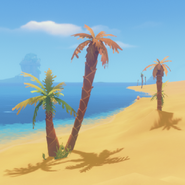 Desert Hoppers spawn all around the central desert area, and Snaillobs and Madcrabs can be found along the Portia River near South Block, as well as along the Western Sea shoreline. After defeating a large amount of Desert Hoppers, a Snake in a Box may spawn.

There is also a Bikini Flippers field boss between the quarry and the Western Sea shore that always spawns once per day.

This article needs more images. You can help add it.

The desert from a distance

Top view of defunct mine