My Time at Portia Wiki
Register
Don't have an account?
Sign In
Advertisement
in: Crafting stations, Assembled items

A&G Construction Store
Best Brother
Harbor Trade Station
Total Tools
The Forge can be used to copy stats from one weapon to another weapon of the same type, somewhat similarly to the clothing revision service that Carol offers.

Warning: because the Advanced Tool Kit requires Gears and Steel Balls from the Factory to craft, but the Factory cannot be obtained until mid to late game, weapons cannot be revised until fairly late in the game.

To obtain the Forge, the player must hand over 10 Data Discs to Petra at the Research Center. The player will receive a letter in the mail the following morning, informing them that the research will take a further 4 days. Upon completion, the player will receive another letter in the mail from the Research Center. The blueprints are obtained automatically after reading the letter.

This item must be assembled at a Level 2 or higher Assembly Station, then placed outside the player's workshop in order to use.

After constructing a Forge and placing it outside the workshop, the player can use it to revise some of the weapons in the game to grant them better stats whilst retaining their appearance, attack speed and style.

A weapon can be upgraded to the stats of any higher tier weapon of the same type. The weapon with the highest stats of its type cannot be upgraded. War Hammer is an exception: it can be revised to Macuahuitl's stats despite having the highest attack for a hammer. The upgraded weapon's stats change after forging, but it retains its original attack speed, animation, combos, and special effects. The ammo used by a ranged weapon also does not change after it is revised.

The player needs to have both the weapon they need to upgrade and the weapon which stats they want to copy in their inventory before interacting with the forge. Revising any weapon takes 6 in-game hours.

Forges run on Power Stones, and up to two can be added as fuel at a time for a total of three days of energy.

Revision prices depend on the source item not the item the player wants to upgrade. The more powerful the source weapon, the more and the rarer the materials required to revise another weapon to its stats.

Forge can be placed in the Recycle Machine to return half of the materials used for crafting it. 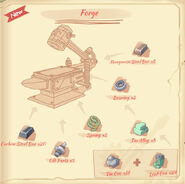