My Time at Portia Wiki
Register
Don't have an account?
Sign In
Advertisement
in: Ruins, Around Portia

Ingall's Mine is an abandoned mine in the southeastern region of the Eufaula Desert, full of rock, sand, and dilapidated wooden bridges and supports. Numerous mutated humanoid monsters and worms lurk deep within the mines, thus marking the mines as a Hazardous Ruin.

Ingall's Mine is the second of the revisitable combat-heavy areas the player will encounter in My Time at Portia and holds significantly stronger enemies than the Sewage Plant, so players are encouraged to upgrade their clothing and weapons and bring health-restoring food, as well as expand and/or empty their inventory to make room for loot. It may also benefit the player to select some combat-oriented skills and/or skills that increase their endurance or stamina. Increased endurance can be particularly helpful to lower-leveled players, as it allows them to sprint further and dodge roll more.

One Dee-Dee Stop can be placed near the mouth of the quarry that Ingall's Mine and Dana's Mine sit in so that the player can fast-travel there via the Dee-Dee Transport System.

Players will need to complete the Rescue in Ingall's Mine before being allowed to enter the ruins. A few days after the player completes the mission, a letter will arrive, stating that the Civil Corps have surveyed the area and declared it to be a new Hazardous Ruin open to the player.

Upon entering the Ingall's Mine, the player is prompted to pick which level they wish to challenge. They must conquer each level before attempting the next, but can re-visit beaten levels at any time, including multiple times per day.

Entering any level will consume a set amount of in-game time, regardless of how much real-world time it takes the player to complete a level. The player has a set number of attempts per level to complete the level; one attempt is consumed each time the player gets knocked out (reduced to zero ⁠

⁠). Once the player runs out of attempts, they will be kicked out of the level and sent back to the entrance.

Defeating each level's boss for the first time will reward the player with a special selection of loot; subsequent defeats of the same level will reward a different selection. Of those one-time drops, the Traveler's Jacket is the only unique item that cannot be obtained elsewhere.

Inside the ruin, each floor has its own set of goals. All monsters on the floor must be defeated in order to advance.

Initially, only Ingall's Mine Upper Level is available to enter. To advance to the next level, the player needs to conquer the preceding level and defeat its boss.

Items obtained for completing the level are fixed loot. The first-time completion contains items that are exclusive for the initial completion; items, such as the Traveler's Jacket, cannot be obtained in subsequent completions.

Each level houses a boss in the final room. Defeating this boss completes the level and awards the player the three guaranteed loot for the level as well as the loot from the boss. Proceeding through the final door after defeating the boss allows the player to exit the level.

Floors are randomized with every level. Each floor may contain monsters, hazards, and/or loot. Rooms may be combined together to form one entire floor, more evidently in higher levels.

Ingall's Mine has one type of hazard: the quicksand. The quicksand is a rapidly-moving body of sand that can entrap the player upon falling into it. If the player falls into the quicksand, the player immediately loses all health points, thus losing an attempt. The player awakens at the starting point of the current floor, assuming the player has at least one more attempt.

Quicksands are commonly found in Lower Level and Deep Level. There are two types of quicksand rooms: one with a bridge across, and another with a scalable tower in the middle. Scaling to the top of the quicksand tower reveals one blue chest.

Monsters can also fall into and perish in the quicksand.

An entirely different, one-time access version of Ingall's Mine is accessible during Rescue in Ingall's Mine. Remington partners up with the player to rescue Mint, Arlo, and Sam, who have been trapped inside after an earthquake caused the entrance to collapse.

⁠ Rescue in Ingall's Mine
Remington's waiting at the entrance to Ingall's Mine. Enter the mine when you're ready. 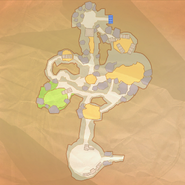 Ingral's mine - A level layout

Ingral's mine - Another level layout