Mounts are domestic creatures, namely horses and llamas, that function as a source of transportation. Horses and llamas can be ridden to travel faster than sprinting by foot, becoming faster and more Endurance-efficient the more they are trained. Each mount has varying physical stats, as well as hunger, mood, and loyalty levels. They can follow the player wherever they go, including after fast travel.

All mounts other than the rental horse require a Stable, which can be ordered from A&G Construction after completing McDonald's Stable. From the stable, the player can add food for their mounts, rename them, or sell them, if they decide they no longer want their horse or llama.

Additionally, a mechanical flying mount is introduced at the end of the final storyline mission, though it is slower than the white horse and does not follow the player around after they have dismounted from it. This mechanical mount does not require any care other than being stocked with Condensed Power Stones or Power Stones for power. Like other mounts, the Robopig Rider will reappear outside the player's house each morning, regardless of where it was left the previous night.

After fixing McDonald's stable, the player can rent or purchase a horse at the Rent-a-Horse stable located beside McD's Jumpin' Livestock.

Each horse comes already trained to different degrees upon buying or renting them from McDonald. The rented horse starts with its stats maxed out, while bought horses must be trained to their full potential. However, the stats of fully trained owned horses exceed those of the rented horse. The white horse also has higher potential stats than the brown horse.

Both types of wild llamas can be caught and ridden. Llamas do not offer as smooth of a ride as a horse does due to their bounding gait, though they are much cheaper to acquire than buying a horse.

Regardless of their loyalty and hunger levels, Colorful Llamas can be sold for up to 6200⁠

⁠ depending on their level of training, and Cotton Llamas can always be sold for 11950⁠

⁠. This makes llamas useful as a mostly-passive daily income source, if one is caught and sold every day.

Wild llamas can be caught using a specific type of trap and bait, the latter requiring replenishment each day.

In order to tame the captured llama, a quicktime minigame must be attempted before approximately 2:00 in the morning, since it consumes a certain amount of in-game time. The difficulty of the minigame is higher if the llama is

angry, but it can be lowered prior to attempting the minigame by feeding the llama the food item(s) that it wants, indicated by the icon over its head, until it is

happy. The minigame can also be made easier with the Born to Ride Skill.

The objective of the minigame is to press the indicated movement buttons as the shrinking yellow rings reach the white circles, filling the gauge enough before time runs out. Well-timed button presses gain more points. The minigame is vaguely reminiscent of a rhythm game, except there is no special music (other than the standard battle music playing) and there is no particular rhythm to the button timing.

After the llama is caught, the entire trap is consumed and a new trap and bait must be placed in order to catch another llama.

All mounts have stats that affect how efficiently they can navigate the world.

Mount stats can be checked at or trained at their stable. Mounts cannot be ridden while being trained, and cancelling the session will either result in zero stat gain (< 3 hour session) or a partial stat gain (> 3 hours).

There is no cost for training other than Time. The Ride Training Skill increases the stat growth after each training session.

Mounts can be named from the Stable interface. There is a 10 character limit to names, and animals can be renamed as many times as desired.

Animals can be fed at the stable with grown food such as Wheat, Apricot or Plant Fiber. As of Update 9.0, feeding mounts only affects their overall happiness. Feeding animals does not seem to affect performance yet. This mechanic is currently not fully implemented.

To make the animals happy, they must be provided food that they like. They will eat what they dislike if there is nothing else to eat, but it will make them unhappy. As of Alpha 9.0, Horses prefer Wheat, and Pumpkin. Colorful Llamas' favorite foods are Lettuce and Cumin, and Cotton Llamas' favorite food is Aroma Apple.

To make a mount loyal, the player can pet them up to three times per day, though the effect on loyalty only happens if mount is very happy. However, mounts' loyalty will slowly decrease each day that they are not pet. Loyalty was intended to make unhappy or disloyal mounts buck the player off, though this feature is currently not implemented. 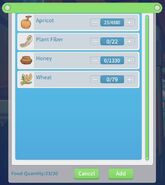 The feed menu with some of the options

A horse in training with an example custom name

A Colorful Llama in training and a freshly caught Cotton Llama, both with custom names