Steam
PlayStation store
Microsoft Store (Xbox)
Nintendo Switch store
Epic Games
GOG
Origin
My Time at Portia is a simulation RPG game developed by Pathea Games and published by Team17. It is the first game in the My Time series and is approximately parallel in timeline to the in-development second game in the series, My Time at Sandrock. The series is inspired by Animal Crossing, Dark Cloud 2, Harvest Moon, and the works of Miyazaki. The primary feature of My Time at Portia is crafting objects in a workshop to fulfill commissions to improve the town of Portia.

The Alpha version of My Time at Portia was released on Steam for Windows on June 28, 2017[1], Early Access was released on January 23, 2018[2], and the full game was officially released on January 15, 2019[3]. A full list of the update patch notes can be found on the Changelist page. Though a MacOS version was initially planned in the Kickstarter, as of June 1, 2020, no Mac version has been released yet and there is no official news on if or when it might be released.[4]

The game was also released for the PlayStation 4, Xbox One, and Nintendo Switch platforms on April 16, 2019. The console version changelists can be found here. Additionally, a Chinese-language mobile version was announced on July 10, 2020, though there is no confirmation yet whether it will be available outside of China.[5]

My Time at Portia is set in a post-apocalyptic era in the world of Portia, where humans are few and relics of the past are scattered throughout. The game takes on the role of a workshop builder, bound to build items using relics for the betterment of society. The main goal of the game is to grow the workshop by creating, upgrading, expanding, and taking on commissions given by the citizens of Portia, while competing with other workshop builders.

While the primary goal of My Time at Portia is to develop the workshop, players can also traverse the world and visit abandoned ruins, fight monsters, and collect relics and materials. Additionally, players can complete missions for rewards and points to increase their workshop ranks. Players can also freely date most characters regardless of gender; the only characters ineligible for dating are elderly, children, pets, and creatures such as Papa Bear Abu.

Despite its workshop feature being the main focus, My Time at Portia also features farming and livestock raising as alternative gameplay options, although these features are not as in-depth as other farming simulations. Farming is done through the use of planter boxes that grow one type of seed for a number of days and are fertilized to allow for more growth. Livestock raising features the coop and the barn that hosts different types of animals.

Many achievements are publicly shown on the Steam game library interface, though there are also many hidden achievements that are gained through special actions or interactions the player may choose to take.

Between September 11, 2017, through October 11, 2017, players could back the project through Kickstarter by pledging a certain amount of money to further the development of the game by expanding the development team and creating a much more detailed, vibrant world. The Kickstarter campaign's goal was to reach $100,000 by the end of October 11, 2017. To promote the campaign, stretch goals were added to provide incentives for pledging. Such goals would add livestock, the Portia Museum, and mounts. The campaign became successful and ended with $146,697 and 3,708 backers who helped reach that goal.

Prior to Alpha 3.0, a Kickstarter extension was posted that lasted between October 16, 2017, through midnight Eastern Standard Time on November 25, 2017. Additional stretch goals were added, such as more side quests, new areas, and downloadable content of the town of Sandrock [ verify ].

Until January 14, 2019, alpha versions of the game were available to play on Steam in Early Access for a low price, with various patches over time that added more content for players to experience. Some late-game content was withheld during production in anticipation of the full release.

On January 15, 2019, 9pm CST, the PC version of the game was officially launched. The full version had an increase in price and various changes, including new characters, missions, features, a flying mount, and more. Within the first 26 hours of release, two hotfixes were released with bug fixes.

My Time at Portia released both physically and digitally on PlayStation 4, Xbox One, and Nintendo Switch on April 16, 2019. Due to manufacturing delays, however, the physical North American version has been delayed until May 16, 2019, though the North American digital version was released on April 16, like all digital versions. By pre-ordering the game, players could receive a thank-you letter in their Mailbox with a Special Gift Box attached, containing a Casual Jacket, Shredded Jeans, 5 Beef Jerky, 5 Rainbow Jam, a Winged Lion statue, a Goolo Goolo Clock furniture item, and a Coin Bag containing 500 Gols.

Certain aspects that are already available on PC, such as voiceovers and the game speed slider that affects time, are not included at launch. However, the speed slider is expected to be added in a patch after the game's initial release. Voiceover is currently not planned to be included.[7]

The game controls for each game differ slightly depending on the console's controller.

Downloadable content, or DLC, is additional content that can be downloaded into the base game. A majority of DLC are paid content and offer new clothing. The original soundtrack containing 28 soundtrack can also be purchased to listen to outside of the game.

Other games in the My Time series[]

My Time at Sandrock is a confirmed game in development that is separate from My Time at Portia but set in the same universe. It will be on Early Access on Steam in Spring 2021 and officially released in Spring 2022.

My Time in Duvos is a fictional game that was the 2020 April Fools' joke.

Though not explicitly confirmed, it is possible that My Time at Sandrock may not be the only new game related to Portia in the future, as Pathea Games is open to the idea of expanding the universe and exploring its lore.[8] One such possible game is My Time with Peach.[9]

By interacting in-game with the Phone Booth in Peach Plaza, the player can learn that Pathea Games's email is admin@Pathea.net. The player can directly send the developers suggestions, feedback, issues, and bugs at this email address. 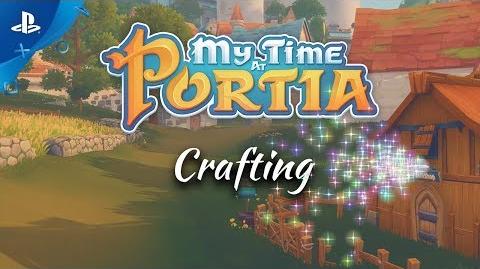