My Time at Portia Wiki
Register
Don't have an account?
Sign In
Advertisement
in: Pages with console version differences, Characters, Shops, Strangers

Edit
watch 02:46
The Quarry - The Loop
Do you like this video?
Play Sound

The Mysterious Man is an unidentified human that always wears a mask to hide his identity. During the last two days of every season, he returns to Portia to sell his goods to the locals and enjoy the town. His most valuable selection is the Wedding Ring. The rest of the year, he travels the Alliance of Free Cities, selling his wares to the people he meets.

The Mysterious Man owns a shop in Portia, but the building is never open for business since he is always out traveling. The shop remains closed even while he visits the city, though he does sleep in his home within.

The Mysterious Man is a man of adventure, seeking rare items to sell to the locals of Portia once he returns to town on a monthly basis. He returns on Saturday of Day 27 and departs before the start of Monday of Day 1.

The Mysterious Man's store building is located near the Hazardous Ruins gate, except due to his absence, his store is never open for business. Even despite returning to Portia, he never opens his business as he usually wanders town during the day.

The Mysterious Man's identity is unknown, as he always wear a mask to hide his identity.

The Mysterious Man, despite hiding his identity behind a red and white panda-styled mask, can be seen to be a fair-skinned, thin man with yellow eyes and white hair covered by a brown and yellow baseball cap with strange writing on the front. He is wearing a long brown trenchcoat over a white shirt, purple pants and red shoes with yellow laces. He also has a small, blue wristwatch. He carries a very large ramshackle backpack made (apparently) of scavenged materials, which is holding a number of packages and mysterious items. From the way he pauses periodically to adjust the pack and breathe, it seems that this is a very heavy pack.

The Mysterious Man does not seem to have any close personal ties to anyone in particular, and his dealings with the player are purely for business.

The Mysterious Man can only be found the last weekend of every month, and can be tracked via the map.

He arrives in Portia Harbor the morning of every last Saturday (the 27th), and walks the same set route on both Saturday and Sunday (the 28th), before departing Portia on another adventure.

The Mysterious Man does not gain any relationship points when socializing, cannot receive gifts, and is not registered in the social menu.

Chat is a basic social interaction. As a stranger, chatting with Mysterious Man does not increase his relationship points as Mysterious Man cannot be befriended; subsequent chatting, on the same day, only results in the same conversation.

The information below only applies to the PC versions.
Consoles may contain different data, and may or may not change in future updates.
Comments: The Television, Name Card, and QQ and Yoyo-specific items are not currently available on consoles.

The Mysterious Man sells rare goods in exchange for other items. However, not all items are available to all players at all times. The QQ-related items require the player to currently be married to Gust in order to appear, while Yoyo-related items are meant to appear only if the player is a Kickstarter backer.

⁠ Legend of the Red Prince
Gale seems down, I should see if he needs any help.

While not involved, the Wedding Ring can only be purchased from the Mysterious Man. 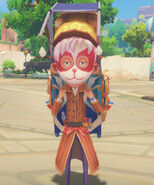 The tracker for the Mysterious Man 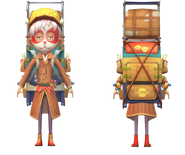