Edit
watch 02:34
Fire Emblem Warriors: Three Hopes - The Loop
Do you like this video?
Play Sound
Spoiler Alert: This page may contain spoilers. Proceed with caution!

Maurice, commonly referred to as Pa, is the enigmatic father of the player character. Not much is known about him except that he was once a Builder and that he was a good friend of Presley's.

Before the start of My Time at Portia, Pa bequeathed his Workshop to the player, prompting the player's move from Barnarock to Portia. Upon arrival, the player finds a letter in their Mailbox from him, expressing both his apologies for his shortcomings as a father and his well-wishes for the player.

He is currently presumed to be out adventuring.

He wears a khaki-colored explorer outfit with a matching hat, somewhat similar to the outfits that Flame Variants wear.

His hair color and skin tone automatically changes to what the player's currently is.

Other than his family consisting of his deceased wife, Clara, and his child, the player character, his only confirmed connection is his friendship with Presley.

After completing The Burnt Warehouse, the player will receive a letter from their father, titled The Great Begeondan:

In the final part of the game, Pa returns from an expedition and visits the builder. After that, he challenges the player to a Builder Bout, with Presley as the judge. This triggers Mission: The Builder Bout.

Right after Pa's return to Portia, Gale introduces him to the townspeople and remarks that they all know him. Here, it is revealed that Pa's name is Maurice.

After completing Mission: The Builder Bout, Pa gives the player a Robopig Rider and leaves Portia the next day, remarking to himself, "See Clara, we didn't have to worry one bit. I'll see you later, my kid."

Pa's hair and skin tone matches the setup used by the player's toon.

Pa visits the library in the commerce guild and mentions Ma. 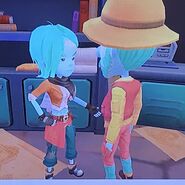