In My Time at Portia, the player character can have up to a total of two children, though both children do not need to be from one partner. Different-sex couples can opt for children via either pregnancy or adoption through the Church of the Light, though same-sex couples can only have children via adoption. Currently, children are not developed much, so the player's spouse rarely interacts with their children and other characters do not acknowledge their existence at all. Children stay babies and do not grow up, regardless of how old they are in terms of calendar years.

To have children, the player must first have 12 Relationship hearts with their spouse, have a Level 4 house, and have a Cradle or a two-person bed that can accommodate a baby. The interaction option to ask their spouse for children does not appear immediately after fulfilling the requirements, and may take some time to appear.

The player can reload the day that they got a child to re-randomize all of the child's physical features.

There is no way to get rid of children after having them, other than reloading a save file that predates the agreement to have children. Continuing the game from an older save file does not remove any achievements that had been earned.

If the couple is of different sexes, the player may talk to their spouse one day only for them to point out that the female of the couple has been tired lately. Gifting the spouse a Children Doll increases the likelihood of the spouse asking for children, though it is not required to instigate a pregnancy.

If the player becomes pregnant, they will receive a -30% Max Stamina and -30% Defense debuff during the pregnancy, and the husband will often say to take it easy and not to strain themselves.

If the NPC wife becomes pregnant, she will either say she is tired or outright state that she thinks she is pregnant. Near the end of her pregnancy, she will stay in bed longer than normal and wake up about an hour later than usual. The pregnancy lasts for approximately two in game weeks. The child's appearance is randomly selected on the day they are born, and reloading the day re-randomizes the child's appearance.

If the player decides to divorce their spouse during pregnancy, the female (regardless if NPC or player) will lose the baby. If it is the player, they lose it as soon as they go to bed at the day of divorce. Next morning player attributes are back to normal.

⁠) and owning a Level 4 House, players can either ask their spouse or be asked by their spouse if they want to adopt a child. If the couple is of different sexes, then the player will be given the option of whether they would like to go for adoption or a biological child. The adoption process is conducted through the Church of the Light.

The player's spouse may also spontaneously ask about having/adopting a kid, if the required conditions have been fulfilled for a while and the player has not suggested it.

If the player answers "Yes":

Upon waking up the next day, the following notification appears:

Alternatively, the spouse may instruct the player themself to submit the application. In that case, the player will need to go to the Church of Light and interact with a book on Lee's lectern, which has a "Submit Adoption Application" interaction. There will be an immediate confirmation message:

After applying for adoption, the player must wait two weeks for the church to send one of the following letters:

Regardless of if they succeeded or failed, the player can re-apply for another child afterwards (unless they already have two children).

If the player decides to divorce their spouse at any point during the process, the adoption will automatically be cancelled. Even if they received the letter of successful attempt before.

Children can be named upon their arrival. They can later be renamed with a Name Card.

If the children are born between the player and their spouse, then the children's skin tone, hair color, and eye color will be randomly picked from each parent. Other features, such as lip and eyebrow size, are somewhat randomized, though if the player has lipstick on, their children may have the same-colored lips. The babies are initially bald, but a week after birth, they will grow a small amount of hair that matches the color of their eyebrows.

If the children are adopted, the children will have completely randomized features. This can result in some babies looking rather odd and some may even have unnatural colorations, such as green skin.

Regardless of how the children were obtained, the player can reload the day that the child arrived to re-randomize all of the child's physical features.

Giving gifts to the children affects the player's relationship with the children. Every character has unique gift preferences.

The player can kiss and pet their child by interacting with them. Each action can be done up to three times per day and gives +2 Relationship points every time it is performed.

The player needs to feed their child one Baby Milk Powder per day. Baby Milk Powder can be purchased at the Food Store. Feeding gives the player +5 Relationship points with the child. Usually, the spouse doesn’t feed the child, but does so if the baby goes hungry for a few days.

Occasionally, the child asks for a toy: a Dinosaur car, Rainbow caterpillar, or Rubber Duck. The toy they want will be shown in a bubble above the child's head. Baby toys can be purchased at the Badge Exchange and gifted by interacting with the child and selecting the Give option. Giving the child the toy they want earns the player +30 Relationship points and does not count towards the gift limit for the day.

The following items are either used only with parenthood, or fit the theme (for decorational purposes).

The following items are not required for or necessarily related to parenthood, but are simply an inconclusive list of ideas to inspire parents wanting to decorate the house for their children.

Some items cannot be displayed on their own and must be put on top of other furniture first.

Two missions task the player with taking care of their children. The missions are not exclusive to any spouse and can occur more than once.

There are three parenthood-related achievements, exclusive to the Steam version of My Time at Portia. All of the following achievements are public achievements and can be viewed from the achievement list in the Steam interface, even if they have not been obtained yet.

The only children of other characters that the player will meet at the start of the game are Jack, Toby, Polly, Dolly, and Molly. All of these children are school-aged and go to the Portia School together, and the player can become friends with them.

As of PC version Steam 2.0.137299, there is one additional child the player can meet: Albert Jr. To unlock him, during Settling Down, the player must recommend that Albert ask Sonia for her opinion, then give him a Wedding Ring. Albert Jr. cannot be befriended or interacted with. Additionally, completing Settling Down immediately makes Albert and Sonia unavailable for the player to date or marry. 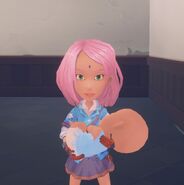 A son from Paulie

A son from Gust

Gust ran over (immediately after waking up) to pick her up and put her back down.

A son with Sanwa

Playing with the babies