Paulie was born on Winter of Day 25 in Portia. Growing up, he was always mocked for being skinny, causing him to build his body to become the strongest man in Portia. Eventually, he also founded Best Brother furniture store, claiming that it was the manly thing to do.

Paulie has a bandaid on above his right eye, blue eyes , a cross shaped scar on his left cheek, and a beard, his head is bald and his hair is a light brown color. He wears a t-shirt with a dark blue outline and light blue center and a red and blue shark logo, green cargo shorts and blue boots. He wears a bandage on his right arm. His shorts are held by a brown belt and his waist is wrapped with another belt. This belt is used to carry a pistol for self defense and his wood carving tools for furniture making as seen on his icon. Though no gun or tools are on his in game model.

Paulie's closest connection in Portia is Mars, his Friend and the owner of the shop next door.

When befriending Paulie, his relationship network with other NPCs will also be affected, resulting in the player receiving favor points from those NPCs as well.

His home is in the same building as his shop (behind the green door at the top of a small set of stairs, beside his shop window) and is open from 7:00 AM to 21:00 PM.

⁠
Receive a 10% discount when consuming in the store

⁠
Receive a 20% discount when consuming in the store

⁠
Receive a 25% discount when consuming in the store

Giving gifts to Paulie affects the player's relationship with Paulie. Every character has unique gift preferences.

The following items are desires, or wishes, which are randomly assigned to one or two characters per week. The player is required to be at least at Associate level with Paulie for him to be assigned a desire. More desires have a chance to appear as the player's friendship with Paulie progresses; the new desires are added to the existing ones but do not replace them. Some characters may desire an item that they do not normally like.

In the event that Paulie has a desire, gifting the wanted item will provide the higher tier points; otherwise, on non-desired events, the item gives the base point value. The birthday or festival day relationship bonus applies when gifting a desired item.

The Simple Desk will appear in Paulie's house if he receives it when desired.

Paulie can spar with the player up to three times per day.

Note that the level in the table below is Paulie's base level at the start of the game. Paulie's actual level can be higher because Paulie will level up over time.

Paulie can play RPS with the player up to three times per day.

Paulie can partake in group photos with the player after reaching the Associate level.

Once the player has become buddies with Paulie, they can schedule a play date together.

After the player has successfully confessed how they feel to Paulie, the player can schedule a romantic date with Paulie.

If the player chooses to dine at The Round Table with Paulie during a play date or date, it is recommended to order dishes Paulie will like. If asked before ordering, Paulie will sometimes tell the player exactly which dishes to order; other times, Paulie will just give little hints. In the event that Paulie does not specify the exact foods desired, the player should order between three and six dishes, depending on what hint Paulie gives. It is recommended to order each of those dishes from different courses, ex. ordering one Appetizer, Meat, Vegetable, Dessert, and Drink course each, rather than five Desserts.

As the player develops their relationship with Paulie, special interactions are unlocked, including Hug and Kiss.

⁠ Commission of Happiness
Help A&G Construction deliver some wallpaper samples to customers before 18:00.
This is Gust's romance mission.

⁠ Furniture Maker
Paulie has commissioned you to make some Copper Blades, you'll need to assemble a Grinder in your homestead to make them.

⁠ Meet and Greet
Mayor Gale recommends that you visit all of Portia's shop owners. 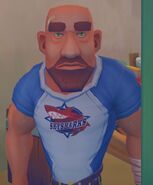 Paulie standing at his shop, Best Brother
Add a photo to this gallery

Retrieved from "https://mytimeatportia.fandom.com/wiki/Paulie?oldid=72935"
Community content is available under CC-BY-SA unless otherwise noted.