Edit
watch 02:19
Wiki Targeted (Games)
Do you like this video?
Play Sound

Photos is a feature and gameplay mechanic available in My Time at Portia after the News Camera mission has been completed. It allows the player to take photos in the world at will. Generally, to take a photo, the player can visit the Photos section of the menu and select the Take Photo icon in the bottom right corner:

The player will then enter a photographer view in which they can zoom in and out, change the pose of the player character, and even move the camera up, down, and around the player character. The camera can move a substantial distance away from the player, allowing for creative framing of the photos.

The photography mode can also be entered by pressing the button assigned to it in the game controls.

After the player views a cutscene or saves a photo after taking it they can view it in the Photos section of menu. There are several albums for the photos: Selfie, Group Photo, Cutscene, Collection, Scenery, and Others. Every photo the player takes and saves is automatically saved in one of these albums.

Each album can hold a limited number of pictures. The player will not be able to save new pictures in Selfie, Group Photo, or Scenery albums unless they free space by deleting old photos. PC players will still be able to view the photos they have taken and deleted in the game folder in %Documents folder%\Portia\ScreenShot\.

The in-game photo album should not be confused with Steam's screenshot feature. Those screenshots are located at C:\Program Files (x86)\Steam\userdata\[your steam id]\760\remote\666140\screenshots

The player can take pictures of themselves in the environment where they are standing by going to the Photos menu and selecting the Take Photo icon in the bottom right corner and using the photographer view to set up and take a photo. The player will have the option to Save or Delete it. If they choose to save it, they can view it and all other selfies they have saved in the Selfies album under the Photos menu.

The Selfie album can hold up to 50 photos. 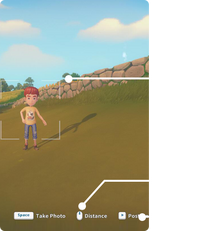 To take a photo with a friend, the player can interact with that friend and select the Group Photo icon (if available) and use the photographer view to set up and take a photo. The player will have the option to Save or Delete it. If they choose to save it, they can view it and all other group photos they have saved in the Group Photos album under the Photos menu.

The Group Photo album can hold up to 50 photos. 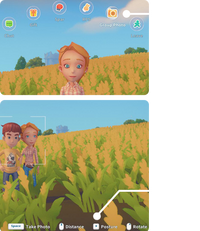 When cutscenes occur as a part of the story of the game, the Cutscene album under the Photos menu will collect photos from those cutscenes. The player can view them at any time in the album and replay a cutscene if they desire so.

Replaying a cutscene plays in the current time, season, setting, and situation the player is in at the moment, not during the events it happened. For example, replaying a cutscene will show the current day's time and season; or any changes made to an area, such as the destruction of Central Plaza in The Final Battle, will also appear in the cutscene.

There are at least 61 cutscene photos the player can collect. [ verify ]

The cutscenes listed below will occur as the player progresses through the story of the game by completing Main missions. Most of these cutscenes are not missable with the exception of ribbon cutting ceremonies which can be missed if the player arrives at their location too late.

Click Expand to view a snapshot from each of the cutscenes.

On a boat to Portia.

My adventure in the Amber Island cave.

The Bandirat Prince enters the scene!

The Boombox made the Panbats dizzy.

The Loudspeaker scared the Panbats away!

Huss and Tuss ran away.

The fountain was polluted that one time.

My adventure in WOW Industries.

Sam teaching the Bandirats a lesson.

The defeat of the Rat King.

The station came crashing down!

Ack trying out the broomstick.

Ack trying out the mop.

Ack trying out the plunger.

The opening of the Portia Museum, the Mayor was really proud that day.

The opening of the Portia Bridge, a memorable day!

A collapse in the tunnel!

Our escape from Ingall's Mine.

Power of the wind!

Put in the Engine

A boat ride to Starlight Island.

Mali found the passcode key for the Locator Computer.

The Mystery Knight breaks out!

The rise of the All Source building

The Rogue Knight defeated the Civil Corps and everyone.

Huss and Tuss save the day!

The Rogue Knight controlling All Source

All Source destroying parts of Portia

Mali took away Ten and Ryder

The Couch for Huss & Tuss

Huss & Tuss's Job at the Harbor

Secondary missions and other events[]

The cutscenes listed below will occur during some secondary missions or special events like the player's wedding ceremony. Most of these cutscenes are missable: the player will lose the opportunity to see a cutscene and get a picture for their album if they ignore or fail the related mission.

Click Expand to view a snapshot from each of the cutscenes.

The house that Huss and Tuss built...

Enjoying some watermelons with Emily

Emily wins in the Autumn Festival!

Enjoying a sunset with Phyllis.

I want to stay in this moment forever...

Soaking in the hot spring with Phyllis

A date with Phyllis at the bar

Visiting Gale after getting married

Fireworks by the waterfall with Gust

Walk on the beach with Ginger...

Ginger left us behind

Ginger walking under the sun!

Blossom under the moon

Proposal with the Moonlight Primrose

Mint sleeping under a tree

Mint sleeping in the desert (he really can sleep anywhere!)

Dinner with Gale and Mint.

A romantic marriage proposal from Mint

Be in Starlight Island with Arlo

Scraps takes away the Worn Gloves.

Albert and Sonia got married.

Taking a walk in the desert

Wedding photo
Cutscene Your Child is Born.png
Your child is born.

A picnic with your family on Amber Island

Django invited me for dinner

Barbecue with Lucy and the kids

The painting fixed itself!

Turning on the Mystery Robot

Toby and the Desert Hopper

When the player takes photos of monsters in the world, those photos, if taken correctly, will be added to the Collections album in the Photos menu.

To correctly take a photo for the collection the player must position the camera so that the entire monster is visible in the shot. This can prove difficult for certain monsters that move quickly, and acting quickly will be necessary for getting the perfect shot. Fortunately, when in the photographer view, hostile monsters cannot do damage to the player character. If the player has framed the photo correctly, a check mark icon will appear on the monster.

There are 28 peaceful and hostile monsters that the player can add to their collection:

Of all the monster photos, only the photo of Backerat is missable. The Backerats are found in WOW Industries during The Poisoned Water, The Burnt Warehouse, or Sam's romance mission, The Lucky Charm. The latter two missions are the only possible chances to take a photo of a Backerat, so if the player is trying to complete their Collection album, they are advised to take the photo during The Burnt Warehouse if not romancing Sam.

Photos of monsters not listed above can still be taken by the player, but they will be placed in the Selfie or Scenery albums instead.

In addition, photos taken by the player for Mei's, Ginger's and Penny's missions are stored in the Collection album. The photo of Ack's Home Station taken during the Finding Happiness mission is also stored here.

This album contains pictures the player has taken of the scenery in Portia. To take a scenery picture the player can press the Camera button while in photography mode. The player character will disappear, allowing the player to take a scenery photo without their character in sight. The player will have the option to Save or Delete it. If they choose to save it, they can view it and all other scenery photos they have saved in the Scenery album under the Photos menu.

If a monster or an object that is a subject of a collection is in sight and a green checkmark appears on it while the player is taking picture, the photo will be saved to the Collection album instead.

The Scenery album can hold up to 50 photos.

This article needs more images. You can help add it.

This album contains other pictures. It appears to be currently unimplemented.

PC players can take as many photos as they desire, though if they take a photo of someone or something they already have a registered photo of, then an option to overwrite the old photo will appear. If the player chooses to overwrite the photo, the new photo will take its place in the album.

Console players are currently limited to a maximum of ?? [ verify ] photos in their album.

If the player desires or needs to delete photos they have taken before, they can go to their album to do so.

Select a photo in the album, then click on the Delete button.

Select a photo in the album with X, then press Square to delete it.

Select a photo in the album with A, then press Y to delete it.

Three furniture items allow the player to select and display any photo saved in their albums. Wooden Photo Frame and Sapphire Photo Frame can be put on walls in the player's home and interacted with to display a photo.

An Advertisement Sign can be placed in the Workshop yard and used to display a photo.