watch 03:19
Wiki Targeted (Games)
Do you like this video?
Play Sound

Pinky is an animal resident of Portia with whom the player can develop a friendship. She is a stray cat who wanders the streets of Portia. Pinky loves fish and will become affectionate for a short amount of time when given fish, following the player around.

Pinky is a large pink cat with dark pink points on her ears, and a light pink undercoat. A tuft of pink fur curls up from the top of her head.

Pinky does not have anyone in her relationship network, but there are framed photos of her being held by Gale in his office and his home.

This article or section is a stub. You can help expand it. Comments: times/locations needed

Pinky's schedule changes if she becomes Familiar (two hearts) with the player, since she will automatically move into the player's house upon that condition being met. Pinky will then start the day in the player's home and can periodically be found there.

In the morning, Pinky is found going into the town in the entrance near the player's Workshop.

If she is not currently living with the player, Pinky will go to sleep at the cafe near Abandoned Ruins #1 each night. She cannot be interacted with while asleep.

Developing a friendly relationship with Pinky unlocks new dialogue that reveals more about Pinky and gives the player access to special relationship perks.

⁠
Stay in your home, treat you as her family.

Giving gifts to Pinky affects the player's relationship with Pinky. Every character has unique gift preferences.

As the player develops their relationship with Pinky, they unlock special interactions, including Pet and Hug. These are unlocked at the "Familiar" level (2 stars), and can be performed up to 3 times a day for +1 relationship point each time.

⁠ A Rough Sleep
Mint is taking a nap, but Pinky won't leave him alone.

⁠ My Eviction from Portia 2
Someone broke your Resource Box and left another threatening letter. Pinky seems to know something, follow her.

⁠Pinky the Devourer
Pinky has eaten the key of the logging field by mistake. Aadit hopes you can prepare a piece of soap to help her spit out the key.

Pinky, living in the Workshop 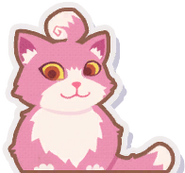 Retrieved from "https://mytimeatportia.fandom.com/wiki/Pinky?oldid=84729"
Community content is available under CC-BY-SA unless otherwise noted.