The player character, also colloquially known as avatar or toon, is the protagonist of the My Time series and is the character that is directly controlled by the player to perform various in-game actions, such as running, gathering, crafting, and more. They work as a Builder, using their crafting skills to help the titular town of their game grow and prosper.

The protagonist is a young adult whose name and gender are determined by the player. The default name for the player character in My Time at Portia is Marco if male or Linda if female. There are no non-binary gender options, but in voiceacted dialogue, the player is often referred to as "Builder," and sometimes a reference to their name or gender is omitted altogether. The player's selected gender does not restrict them from wearing any clothing or determine who they are allowed to romance, though some clothing will automatically change appearance based on the player's selected gender (such as the Elegant Dress Bottom being pants for male characters and a skirt for female characters and the Swimsuit Top being completely different items based on gender).

The player can fully customize their character to fit their liking. The player can choose between a male or a female character, choose hairstyles/skin tones and adjust the color and length of the hair, and adjust facial features.

Throughout the game, the player can customize their character's attire by purchasing clothes from shops and crafting or acquiring accessories. Many clothing items can be purchased with the primary in-game currency, gols, but some items can be traded for with items such as Flexible Fiber. Some accessories show up on the player while worn, such as sunglasses and pendants, while others do not.

Later on, a feature is unlocked whereby the stats of one clothing item can be sewn onto another piece of clothing, enabling one to have the cosmetic looks desired without sacrificing stronger stats.

The player character was born and grew up in Barnarock, a city outside the Alliance of Free Cities. Their birthday is chosen by the player at the start of the game with no restrictions, even if the chosen birthday overlaps with festivals or other characters' birthdays. Their mother ("Ma"), Clara, is deceased, and much of their childhood was spent living with their Aunt Kendra.

During the game, the player is permanently a young adult and is often referred to as "The Builder". The Builder arrives in Portia via boat from Barnarock to settle in the workshop they inherited from their absent father, Maurice, often simply referred to as "Pa". The player is met by the commissioner of the Commerce Guild, Presley, who helps the player join the Guild and register their workshop with the mayor of Portia to become a Builder.

The player soon finds a rival in Higgins, another workshop owner and the top Builder in Portia at the time of their arrival.

The personal life of the Builder is somewhat determined by the player. Whether the player chooses to romance, marry, and have children or not is up to them. The Builder will, however, live up to their title and spend most of their time improving the town of Portia, socializing with its inhabitants, joining in on festivals and most importantly, completing commissions.

The Builder gathers resources from all over the surrounding area of Portia via quarrying, logging, farming, foraging, spelunking, and monster-slaying to craft the items requested by the residents. Through many trials and unexpected happenings, the Builder makes their honest attempt to make a name for themself as the top workshop owner of the town. 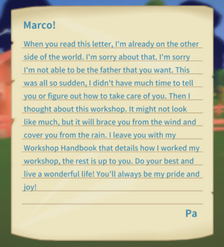 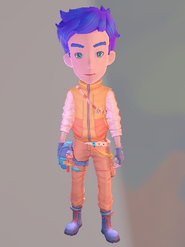 Early art of a male player tinkering with a relic 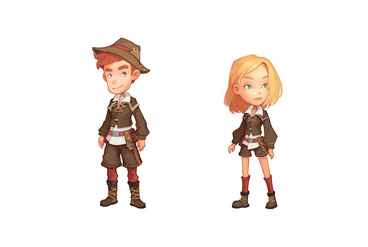 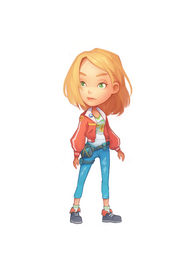