Edit
watch 02:34
Fire Emblem Warriors: Three Hopes - The Loop
Do you like this video?
Play Sound
Spoiler Alert: This page may contain spoilers. Proceed with caution!

Portia Harbor is the only harbor the coastal city of Portia has. It sits on the Western Beach and overlooks the Western Sea. Gatherable piles of Shells and Sand line its sandy beach, and Tody and Wuwa's house is the lone structure besides the small wooden pier that initially stands watch over the water. Later development opens up a new shop that has the largest starting daily buyback budget of all the shops, allowing more expensive items to be sold to it.

For many years, Wuwa has occasionally ferried people between various towns via sailboat, departing from and stopping at the harbor.

With his aid, the player arrived at the harbor on Spring 1 to start a new life in Portia.

After the Builders began to improve the town and stimulate the local economy, Musa, a businessman and the richest man in the Free Cities, visited Portia to seek development of Portia's harbor. With the help of his funding, the Portia Harbor redevelopment was completed, adding a a lighthouse, a new dock, warehouses, and the Harbor Trade Station. However, Tody disapproved of the development and committed arson to the warehouse. After his imprisonment, a new warehouse was built in its place.

The Portia Harbor is on the Western Beach.

When the game opens, the player rides in on Wuwa's boat into Portia Harbor, making the pier the first place in Portia that the player sets foot on.

This small wooden pier is later demolished during the harbor's expansion.

After Musa arrives, he invests in expanding the harbor in the interests of promoting trade. There is a mission to create a lighthouse and a crane. There are also several other commissions to help complete the enlarged harbor. These require ten sets of Concrete, Igneous Brick and Waterproof Cloth.

Once the expanded harbor is complete, the new Harbor Trade Station shop becomes open for business.

A fishing spot is located to the north of Portia Harbor. 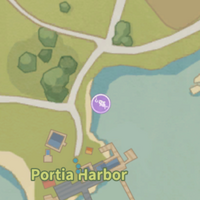 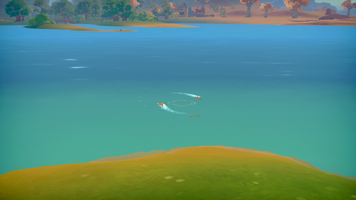 The fishing spot north of Portia Harbor is along the coast, just east of the road. Wuwa can often be seen fishing at this spot. It contains more difficult and valuable fish than the other beginner fishing spots, but it can reached at the start of the game.

Wuwa's boat (not seen in the harbor, other than the opening cutscene)