The Portia Museum is a building in Central Plaza that holds old world relics, crafting stations, and artwork that have been donated by people. The museum was constructed by the A&G Construction, with the assistance of the Construction Crane that the player built.

The Portia Museum was finally built and held a grand opening the following Saturday. Merlin volunteered to be the curator of the museum.

The Portia Museum has numerous podiums or shelves that display unique items. These display cases can hold small, medium, or large assembled items. On the second floor, a large aquarium is located within the wall. Unique fish specimens can be donated to the aquarium.

NOTE: As of Version 2.0.139521 there is a podium for an unknown Item in the middle of the Main Hall, However it is not yet usable by the player.
NOTE: As of Version 2.0.139521 there are a total of 93 obtainable items that can be donated to the Portia Museum. The rest are either no longer available or have not been implemented yet.
NOTE: The Small Item Exhibit Item[sic] item type will accept either a Relic or Artwork Item.

To donate an item, place the item in your hotbar and then have your character hold the item. Then, stand before the display and place the item. Note that not all items fit everywhere.

Items that have been donated cannot be returned to the donor, and each item can only be donated one time. Currently, not all assembled items can be donated. There are not enough slots for all possible donations.

Other characters will visit the museum on occasion to look at the donated items. Depending on their preferences, this can increase the Players relation with them, similar to how they react to the same item displayed in the players yard. These interactions seem to occur more frequently compared to the yard, though the point gains are also lower. Some characters are more likely to visit the museum or the yard, or don't visit either place at all.

This article or section is a stub. You can help expand it. Comments: Needs console controls

If the player become Friends (⁠

Merlin, she will allow the player to rearrange objects that have already been donated and placed.

To move items, walk up to the object to be moved, press F (Pickup), walk to the destination podium or shelf, and place the object down. Note that selecting and moving shelf items may require pressing T to cycle through the available shelf locations. An item may only be moved to another podium or shelf of the correct type.

Most of the items that can be crafted at the Assembly Station can be donated to the Portia Museum and occupy special spots at the front of the museum. They are referred to as Assembled Items and come in four sizes: Small, Medium, Large, and Ultra Large.

The majority of items that can be donated to the Portia Museum are relics, re-assembled from Relic Pieces at the Recovery Machine. They are referred to as Relics and come in five sizes: Small Item, Small, Medium, Large, and Special Item.

There are also a couple of items in the world which are considered Relics, but do not have to be re-assembled.

NOTE: The Printing Press is considered as a Medium Relic in the Museum, although it is an Assembled Item.

The Portia Museum also accepts a number of books and paintings as Small Item Artwork.

After donating a certain number of items, the player can collect item rewards from a small table at the front of the Portia Museum. All items count equally toward the reward, except fish, which do not count.

By interacting with the Relic Pieces Exchange Board, the player can instantaneously exchange relic pieces with the citizens of Portia. The larger item icon on the left is the piece offered by the NPC, while the desired item is the smaller item icon to the right of the larger icon. When selecting an individual request, the right-hand column will show the item(s) or gols being requested (under the "The patron wants to exchange for these pieces" text) and whether the player has the requested item available in their inventory for exchange. Some trade requests may simply ask for another relic piece, while others may ask for Gols. The requested relic piece must be in the player's inventory to be traded.

Request for a Relic Piece

Another request for a Relic Piece

Another request for Gols

The requests on the board refresh every Sunday. Up to four requests are posted, and there is a time limit for each request ranging from one day to four days. Completing a request earns the player 10 or 30 relationship points with the character who posted it.

The Aquarium is a large fish tank located on the second floor. Initially, the Aquarium is empty, but it will fill up with the different types of fish species as the player donates them.

The player can donate up to one each of common, emperor, and king qualities of each fish. However, if a more rare fish is donated first, then the player cannot replace that more rare fish with a more common quality of the same fish. Therefore, the player can either donate the common fish first, followed by the emperor fish to replace it, then the king fish to replace either of the former, or donate the king or emperor fish first without donating the common fish at all.

To donate a fish to the Aquarium, place the fish on the hot bar, and hold it while approaching the face of the Aquarium. The prompt to Observe will then include Put in, and selecting that option will add the fish to the tank (if that fish or a higher quality of that fish species has not already been added).

If a higher tier of fish donation is completed before the less rare fish donation, Merlin sends the player all rewards earned simultaneously. 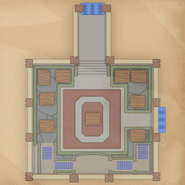 Alpha map of the 1st floor