The Portia River is the long body of water that divides the fields around Portia from the Eufaula Desert. The river flows southwest from its source at the Portia Falls (between Bassanio Heights and Eufaula Heights), down the Bassanio Falls, along the fields of Portia, past South Block and Amber Island, and into the Western Sea.

A bridge connecting to Amber Island was washed away from a storm prior to the player's arrival. Gale issues a commission to rebuild the bridge. Another bridge was built to connect to the Eufaula Desert.

At the start of the game, the player cannot reach the areas on the other side of the river. Getting too close to the river (or any other deep body of water) will cause the screen to turn black and reset the player's position to somewhere on the nearby shore. Later, however, the player gets the opportunity to help build two new bridges, opening up new areas for exploration.

Once it has been built during The Portia Bridge, the Portia Bridge connects the Portia mainland to South Block and Eufaula Desert. This also allows the player to finally meet the elusive green Hulu Brother, Siwa.

The river features four fishing spots in its waters, all with different fish:

The player's first Fishing Day is most likely to occur at the Bassanio Falls or Portia River fishing spots.

This article only lists the Portia River fishing spot. The other three locations can be found at their respective pages. 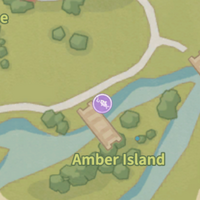 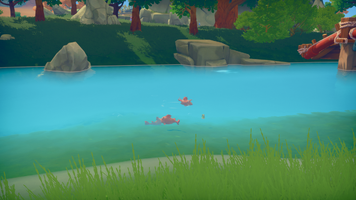 Close-up of the Portia Bridge at sunset

The other side of the Portia Bridge, showing Bassanio Falls
Add a photo to this gallery

Retrieved from "https://mytimeatportia.fandom.com/wiki/Portia_River?oldid=74299"
Community content is available under CC-BY-SA unless otherwise noted.