My Time at Portia Wiki
Register
Don't have an account?
Sign In
Advertisement
in: Pets, Characters
English

QQ is an animal resident of Portia with whom the player can develop a friendship. When he's not with Gust, he can be seen inside Gale's home wandering around or sleeping. QQ generally avoids going out in the rain or snow.

QQ originally belonged to Gust's master, Verna. After Gust went back from Atara to Portia, QQ was given to Gust and became Gust's loyal pet pig. QQ is never too far from Gust, often following him to the A&G Construction or napping nearby while Gust is gathering inspiration near the outer walls of Portia.

QQ has a keen sense of smell and loves apples.

QQ is a spherical male pig with darker spots on his pink body. He has blue eyes, pointed ears, and a round snout, and can often be seen with his tongue stuck out. QQ wears a blue harness with two pink bells attached to it.

QQ is almost always at the side of Gust, his owner. He was given to Gust by Gust's master.

Below is his generic schedule. Certain events may alter his schedule, such as changing game speed, conversing with him, missions, special events, or other distractions. All times listed are estimates unless otherwise noted.

Giving gifts to QQ affects the player's relationship with QQ. Every character has unique gift preferences.

QQ can partake in group photos with the player after reaching the Associate level.

⁠ Gust's Commission
Help Gust looks after QQ. Gust will come back for QQ when he's not so busy.
This is Gust's romance mission.

⁠ Run QQ Run!
Gust seems to be having a little trouble, go help him? 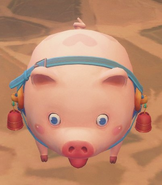