A&G Construction Store
Clothing Store
Food Store
Total Tools
Rider's Cap is a piece of clothing worn on the head. It is a part of the Rider's set, along with Rider's Coat and Rider's Breech.

Rider's Cap can be purchased at the following shop in exchange for Rider's Badges earned at the Land Run festival:

Rider's Cap can be put in the hat slot in the Inventory menu to boost the player's max HP by 150. It requires a player level of 12.

Rider's Cap can be revised at the Clothing Store for 3 Flexible Fiber and 3 Leather after completing Carol's Sewing Machine mission. 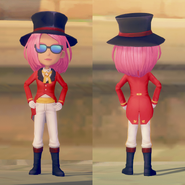 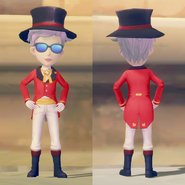 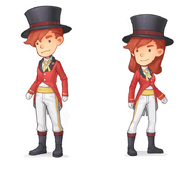 Concept art of the player characters wearing the rider's outfit

Retrieved from "https://mytimeatportia.fandom.com/wiki/Rider%27s_Cap?oldid=59773"
Community content is available under CC-BY-SA unless otherwise noted.