The Winter Solstice is an event taking place on Day 23 of Winter. It marks the tradition that began with people in the Age of Darkness tossing food items into the hot pot to survive. This event starts at 10:00 and ends at 15:00.

After the hot pot, the villagers move into the field south of Central Plaza, and a single round of the Snowball Battle mini-game may be played. It can be started between 16:00 and 18:00 by interacting with the same glittering stone as in the Snowball Battle event. This has its own reward delivered by mail instantly after it is over, and is affected by the player's performance. This is not marked on the festival calendar.

After the snowball battle, the villagers move back to Central Plaza for a large group photo, then move to individual group photo locations later that night.

Before the festivities start, Gale and Lee deliver a short speech:

The purpose of the Winter Solstice is to toss food ingredients into the hot pot. After tossing ten items, the player can grab a non-inventory serving of the hot pot, which will heighten some of the player's abilities for a limited time. The townsfolk can also toss in food, but may also request food ingredients; when the request is granted, the character gains relationship points, depending on the type of food. Most food ingredients can be purchased from Emily's Food Stall; other ingredients must be gathered elsewhere, such as Ginger, Bamboo Papaya, Meat, Snake Meat, Lantern Fish or Wise Fish.

Several characters have a special dialogue specifically made for this event.

Below is a list of food ingredients that can be tossed in to the hot pot.

During this event, Emily opens up her food stall between the hours of 7:00 to 15:00. She sells a wide variety of food ingredients that can be used on the hot pot.

When the Solstice Hotpot and Snowball Fight finishes, special group photo opportunities will become available. They are marked on the map with

icon. Activate the glittering camera sign (right) and you'll take a group photo with the people standing next to the sign. The pose is unique to this festival and group of people. Try and get them all before the day ends! 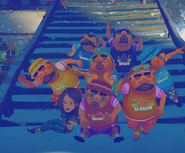