My Time at Portia Wiki
Register
Don't have an account?
Sign In
Advertisement
in: Pages with console version differences, Workshop, Locations

The information below only applies to the PC versions.
Consoles may contain different data, and may or may not change in future updates.

Pa
The Workshop is the focal point of My Time at Portia, functioning as both the player's home and work area. After arriving in Portia, Presley will show the player to their inherited Workshop right outside of the city walls, then hand over a letter from the player's father containing his old Workbook, which details a few basic Assembly Station recipes that will help the player start their new life as a Builder.

As commissions, optional quests, and certain story goals are completed, the Workshop will earn ⁠

⁠Reputation points. Depending on the amount of Reputation points the workshop has accumulated that season, prizes may be earned. The total amount of points earned throughout all years determines the player's Workshop Rank, which allows them to access Inspections as well as higher difficulty commissions with better rewards.

The house is where the player sleeps and begins each day.

At first, the house is somewhat dilapidated and needs several broken floorboards repaired. The floorboards must be repaired with Wood in order for sleeping to fully recover stamina (⁠

⁠), as sleeping in the broken house only recovers a portion of the player's maximum ⁠

⁠; a total of 36 Wood is required to fully repair the house.

Apart from the player, spouses can live in the house and sleep beside them. Marriage becomes available upon upgrading the house to level 2. At the level 4 upgrade, the couple can have children, through pregnancy or adoption.

Pets can also live in the house, provided the player has reached Familiar status (two full relationship stars) with them. Removing the pets requires their friendship level to drop below Familiar status, which is possible via giving the pet hated gifts or an Abandon Tag.

By placing furniture inside the house, the player can gain stat bonuses up to a maximum specified by the level of their house. The home panel can be found to the left of the door, displaying all furniture stats, helper options, and logs all helper activity.

When the player has helpers, the player can control the helper's activities through the home panel. Helper options include:

The house can be upgraded and moved at A&G Construction. House level 1 has a dimension of 10 x 10 squares, level 2 with 22 x 20 squares, and level 3 and level 4 have the same exterior dimensions.

At level 4, the player can buy an alternative exterior appearance, 47 x 33 squares. It has same effects and same interior than the original level 4 house. 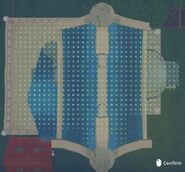 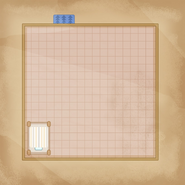 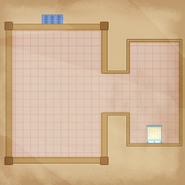 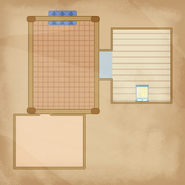 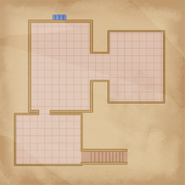 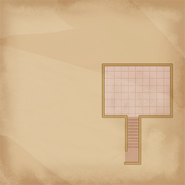 The information below only applies to the PC versions.
Consoles may contain different data, and may or may not change in future updates.
Comments: Furniture placed on the balcony will not [ verify ] count towards the player's stats (though the home panel will include the stats of balcony items in the bonus stat total)

The empty space underneath the balcony is still considered part of the yard. Items can be placed here as normal, though in order to place outdoor flooring under certain parts under the balcony, such as under the supports, the player will have to place the flooring first, then move the house (via A&G Construction) onto the flooring.

The starting property is 384 total squares, with an additional 2x6 area of unusable space by the gate. The cost to upgrade the workshop property can be reduced by improving the player's relationship with Mayor Gale.

The Worktable and Assembly Station are the two key non-craftable workstations that the player will utilize throughout the game. With the help of A&G Construction, they can be moved anywhere within the player's yard as long as there is enough space for them. These stations must be upgraded to at least Worktable Level 3 and Assembly Station Level 2 in order to finish the game.

Other crafting stations can be crafted and placed anywhere in the yard or on the player's balcony (available after the player has upgraded to at least the Level 2 house).

Unlike the unlimited amount of items the player can place in their yard on PC version, console players are limited to placing a maximum of 50 production items and 50 decor items.

Throughout the game, the player will receive mail via the mailbox outside the Workshop. These letters contain general information, events, missions, Gifts, crafting recipes, and sometimes notes from angry citizens. The presence of a new letter is indicated over the mailbox, with a special marker for letters that start quests. There is no limit to how much mail the mailbox can hold, and all mail is stored in the mailbox in chronological order.

This article or section is a stub. You can help expand it. Comments: Number of items before resource box gets full?

The resource box is a special red storage chest that sits on the ground next to the mailbox. Items gathered by any helpers will be placed here for the player to retrieve at their discretion. Upon unlocking the Tree Farm and Dana's Mining Company and paying for their resource delivery services, crafting materials from those services will also be delivered to the resource box each morning.

If left unattended for a few days, the resource box will emit a red glow and an icon will show up, alerting the player that it is full. 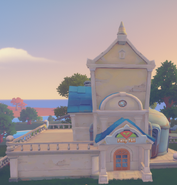 Level 4 exterior, with a custom name